Emperor in the West

Johannes, who was born about 380 AD, and rose through the ranks of the civil service until he was eventually appointed principal secretary to the Western Emperor Honorius. The latter died childless on August 25th, 423 AD whereupon Johannes seized the vacant throne and sent an embassy to Theodosius II in Constantinople requesting official recognition. This was not forthcoming, as the Eastern Emperor had his own candidate for the throne – Placidius Valentinianus (III), his cousin, and a nephew Honorius by his sister, Galla Placidia.

Theodosius sent an army to Italy to champion the cause of the four-year-old Valentinian III, and Johannes was captured and executed after a usurpation of approximately two years.

The coinage of Johannes was mostly issued from his residence at Ravenna (near Milan). Although in the Eastern Empire a facing military bust had now become normal for the gold solidii, in the West the traditional diademed profile effigy was still retained.

daughter of Theodosius I
Half-sister of Arcadius & Honorius

Galla Placidia was the daughter of Theodosius I and Galla. She was the mother of Valentinian lII and the half-sister of the Emperors Arcadius andHonorius. Placidia was taken hostage by the Visigoths after Alaric’s capture of Rome in 410 AD, and later married the Visigoth King Ataulf. After his murder, Roman military and political pressure induced the Visigoths to give her back for a fee of 600,000 measures of corn and land in southern Gaul.

In January, Placidia was then married to Constantius III, the powerful general of Honorius who became the unrecognized Emperor of the West. Following the death of her husband, Constantius III, Placidia began to receive some increasingly unwanted attentions from her half-brother Honorius. She and her children moved to Theodosius II’s court at Constantinople. After the death of Honorius, she returned to Italy as Augusta, and as regent for her son Valentinian III, a post she retained until 437 when Valentianian turned 18 and married Licinia Eudoxia, the daughter of Theodosius II. She survived as a revered dowager Empress until 450. Placidia is perhaps best remembered today for her building program in Ravenna, elements of which still exist into modern time. 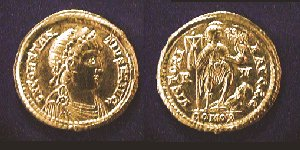 The coinage of Sebastianus is extremely rare. No denominations are known other than the typical reduced weight silver siliqua of the period.

Jovinus was a Gaulish nobleman by birth. He was proclaimed Emperor at Mainz in 411 AD with the support of several barbarian kings, including King Guntiarius of the Burgundians and Goar King of the Alani. He raised his brother, Sebastianus, to the rank of co-Emperor. Jovinus ruled for two years in Gaul before being attacked by Ataulf the Visigoth who had formed his own alliance with Honorius. Jovinus was taken as a prisoner to Narbonne. Like Constantine III two years earlier, Jovinus was despatched under armed escort to Honorius’ court, but never lived to complete the journey. He was executed on the orders of Dardanus – Prefect of the Gauls.

Puppet Emperor of the Barbarians

Priscus Attalus was Prefect of Rome at the time of the second siege of Alaric the Visigoth King (409 AD). Alaric threatened to destroy Ostia and all the granaries maintained there and as such cause widespread starvation throughout Rome. Alaric used this threat to blackmail the Senate into appointing Priscus Attalus Emperor. Although of noble birth, Priscus was a feeble man content to remain as the puppet of Alaric.

Priscus was deposed one year later in 410 AD due to his incompetence and the city was plundered for three days. Attalus remained in the Gothic camp unharmed. He travelled to Gaul where, four years later, he was proclaimed Emperor once again by Alaric’s successor, Altaulf in 414 AD. Priscus was deposed for a second time in 415 AD and handed over this time to Honorius who later banished him to Lipara.

The large silver multiple of 24 Siliqua was struck in 409 AD and probably represents an accession issue and may have been struck as a desire to present impressive gifts to his German allies.

Maximus was proclaimed Emperor by the rebellious general Gerontius in 409 AD. Little is known of this usurper other than following the death of Gerontius, Maximus was pardoned by Honorius and permitted to retire from public life.

The coinage of Maximus is quite rare. No denominations other than the reduced silver siliquae are known. 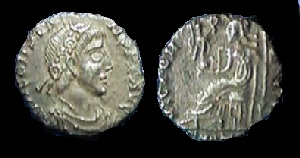 Constantine III was a man of humble origin and a common soldier. He was proclaimed Emperor by the Roman legions stationed at the time in Britain during 407 AD and subsequently raised his son Constans to the rank of joint Emperor. Constantine immediately crossed over the channel to Gaul where he quickly established himself along side the barbarian invaders of the province. In 408 AD, Constantine expanded his territory to include Spain. In 409, however, Spain was overrun by the Vandals, Alani, and Suevi, primarily due to treachery on the part of one of his own generals named Gerontius. Constantine was eventually captured by Constantius III, a leading general under the Emperor Honorius. Constantine III was ultimately sent to Italy in 411 AD where he was put to death.

Son of Emperor Theodosius I

Flavius Honorius was the younger son of Theodosius I and Aelia Flaccilla. Honorius was born in 384 AD and was raised to the rank of Augustus in 393 AD. Upon the death of his father Theodosius in 395, the Empire was divided in two with Honorius receiving the throne of the Western division of the Empire while his brother Arcadius succeeded to the throne in the East. Like his brother, Honorius inherited none of his father’s abilities. The real power rested in the hands of his guardian Stilicho, whose daughter, Maria, he married in 395 AD.

Stilicho cared little for improving the Empire but was instead obsessed with trying to gain control of the Eastern division for himself. He interfered in the internal affairs at court in Constantinople and ordered assassinations all in an attempt gain control of the East. The result of his obsession was to allow the defenses on the Northern frontier to decline.

In 402 AD, Honorius moved the capital from Rome to the Milan area at the city of Ravenna. This was a marshy area in Italy which would prove to be easily defended. This would ultimately become the seat of power in the West even for the Gothic hoards who eventually inherited the Western provinces following their collapse.

On the last day of the year 406 AD, a huge group of Gothic barbarian tribes gathered along the Rhine. The Alamanni, Alans, Burgundians, Vandals and assorted allies poured into Roman territory burning and destroying settlements from Gaul down to Spain.

Stilicho proved ineffective and was caught off guard. He failed to strike any successful countermeasures and soon found himself with Alaric, King of the Visigoths 395-410 AD, demanding tribute from Honorius. As the provinces became unstable, usurpers began to surface, some on their own and others as puppets of the Visigoths. In Britain, Constantine III was proclaimed Emperor by his troops and he invaded Gaul. In Spain, the barbarians put up Maximus as Emperor, who was later pardoned by Honorius. In Gaul the barbarians set up another puppet Emperor Jovinus. Honorius’s brilliant countermeasure was to have Stilicho executed. This merely cleared the way for the Visigoths who eventually captured Rome itself in 410 AD taking Galla Placidia, Honorius’ sister, hostage.

Another puppet Emperor was set up by the Visigoths in Rome itself – Priscus Attalus. However, Alaric died shortly after sacking Rome, which was perhaps the only fortunate event Honorius may have experienced. Constantius III, who one day would become Emperor himself, was an able general who Honorius wisely selected to replace Stilicho. At last, a defense could to mounted and Constantius III would score a victory over Alaric’s successor, his brother Athaulf.

Athaulf led his army over the Alps and into Southern Gaul taking his puppet Emperors, Attuls and Galla Placidia, with him where he confronted the barbarian puppet Emperor Jovinus. After negotiating with both, Athaulf sided with Honorius, captured Sebastianus, Jovinus’ brother, and eventually prevailed over Jovinus executing them both.

Athaulf married Galla Placidia in 414 AD and seemed no longer content to ravage the countryside. He then attempted a reconciliation with Honorius, but there seemed to be no deal to be had. War broke out as a result and Athaulf faced Constantius III who blockaded the coast of Gaul laying waste to much of the countryside in the process. Attalus was captured and Athaulf was assassinated by a group of barbarians seeking revenge for his murder of their chieftain.

Constantius III died in 421 AD and Galla Placidia fled to the East away from her brother Honorius’ sexual advances. Galla took her children as well thus fleeing to the court of Theodosius II at Constantinople. This left Honorius alone and without an heir since his marriage to Maria produced no children as was the case with his second marriage to Maria’s sister, Thermantia. Honorius died on August 15th, 423 AD with one of the most incompetent records of any Roman Emperor to date.