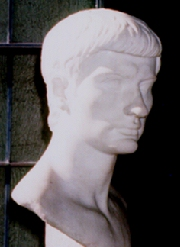 Marcus Junius Brutus, perhaps the most famous assassin known to history, descended from a long line of distinguished Roman Republican ancestors. According to Roman tradition, one of these, Lucius Junius Brutus, the so-called “Founder of the Republic” and Consul in 504 BC, took a leading part in expelling King Thrquinius Superbus, the last of the Etruscan Kings. In 54 BC, as Moneyer of the Rome Mint, Brutus issued silver denani honoring two of his most illustrious ancestors, the previously mentioned Lucius and C. Servilius Ahala, Master of Horse in 439 BC, celebrating the commitment of his family to the freedom of the Republic.

Brutus was the son of Marcus Junius and Servilia. His mother was the half-sister of Cato Uticensis. Despite the fact that his father was killed in 77 BC by Pompey, Brutus sided with Pompey in 48 BC in the war against Caesar. Why Brutus would support the man who killed his father is not entirely known. He was brought up in a strict Republican household no doubt. However, Caesar was also known for his affair with Brutus’ mother, which has raised speculation that Brutus might have been the son of Caesar.

Following the defeat of Pompey at the Battle of Pharsalus in 48 BC, Caesar pardoned Brutus and appointed him to the Governorship of Cisalpine Gaul. Caesar’s kind treatment of Brutus, despite the continuing criticism of Caesar’s dictatorship, continued through the next several years. In 44 BC, Brutus was made praetor and also received the governorship of Macedonia – an extremely profitable position.

In 44 BC, Brutus came under the strong influence of Gaius Cassius, a bitter enemy of Caesar. Brutus then became a leader in the group of irreconcilable nobles in an assassination plot against Julius Caesar. The assassins surrounded Caesar in the Senate chambers on March 15th, 44 BC – the Ides of March. Cassius was first stabbing Caesar in the neck, with Brutus delivering the fatal and final wound. The immediate public outcry, skillfully orchestrated by Marc Antony, forced Brutus and Cassius to flee to Macedonia.

Rome was entering yet another civil war in the aftermath of the assassination of Julius Caesar. Cassius Dio tells us that Brutus broke with the Republican tradition of banning the portraits of living Roman citizens on his coinage. “And also on the coins, which he caused to be struck, he exhibited a likeness of himself, and a cap and two daggers…” The assassination was now being advertised by Brutus telling the world of his honorable deed.

While in Macedonia, Brutus assembled a considerable army simultaneously keeping his lines of communication open to Rome. Although the Senate did not initially approve of Brutus’ occupation in Greece, having granted him another province instead, they eventually legalized his occupation in February 43 BC. In the summer of 42 BC, Brutus was joined by his co-conspirator, Cassius with his Syrian army where they planned to meet the forces of Antony and Octavian (Octavian being ill at the time of battle). In the ensuing two battles at Philippi in Thessaly the legions of Brutus and Cassius proved to be no match for Antony. Rather than be captured, the two co-conspirators each separately committed suicide, Brutus by falling on a friend’s sword. Octavian brought Brutus’ severed head back to Rome and threw it at the foot of Caesar’s statue to show to all in Rome that Caesar’s death had been avenged.

Although many have argued that Brutus’ cause may have been noble, his motives were less so. His actions and association with the noblemen and special interest groups of Rome professed the goal of the restoration of the Republic. In actual fact, Brutus seemed preoccupied with monopolizing commercial advantage and government appointments. It is clear that the plot against Caesar was far from noble and in reality may have been more of an attempt at removing Caesar who was becoming a direct threat to the financial security of the monopolistic noble class that dominated the Roman Senate.