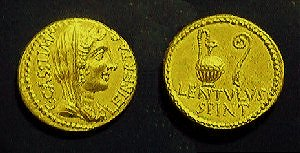 Gaius CASSIUS Longinus was appointed Quaestor in 53 BC. Little is known of his early life. Much of what has come down related to the period of the Civil War. Cassius had served in the military under Marcus Crassus – a member of the 1st Triumvirate. At the battle of Carrhae against the Parthians, he stood by and watched the annihilation of the famous Crassus. It is at that point in his career that power seemed to come his way. In the aftermath of the battle, Cassius assumed control of the meager remnants of the legions, returning in 52 BC to eventually defeat the Parthians. Cassius had formed a power base in Syria that allowed him to extort money from anyone who wished to trade in the area. As such, this position enabled him to increase his wealth significantly.

Cassius was appointed Tribune in 49 BC. Despite serving under Crassus, a member of the 1st Triumvirate with Caesar, Cassius sided with Pompey and the corrupt Senate of Rome against Caesar. Despite the fact that Cassius was then later pardoned by the naive Caesar and made a Legate in 48 BC, Cassius remained a greedy man intent upon following his own self-interest – the pursuit of wealth.

After Caesar’s pardon in 48 BC, Cassius became politically active in “Republican Causes” and aligned himself with the wealthy corrupt nobles and senators of Rome. In 44 BC, Cassius became aPraetor, and it was proposed that he be given governorship of the Syrian provinces the following year. Earlier, as a supporter of Pompey, Cassius had been an associate of Brutus as well and in fact was married to Brutus’ half sister, Junia Tertulla. This association grew as both men appeared to have the same goal – to be part of the great mercantile monopoly that virtually controlled the Senatorial appointments. As such Cassius was in the middle of senatorial corruption for his personal expansion of wealth.

When Caesar moved to end the corrupt appointment system, Cassius and Brutus conspired with the noblemen to assassinate Caesar in the Senate chamber on the Ides of March (15th), 44 BC. In the aftermath of public outcry, orchestrated by Marc Antony, Cassius was forced to flee Rome. He at first fled to Sicily where he was given a commission to export corn to Italy. In September of that year, he fled to Syria, his old home territory. Cassius retained many associations in Syria where he ousted Dolabella, one of Marc Antony’s Counselors, and assembled an army. In the summer of 42 BC, Cassius joined forces with those of his co-conspirator – Brutus. They planned to confront the combined legions of Antony and Octavian at Philippi. The battle was lost and Cassius, having little alternative, committed suicide by ordering his shield bearer to put him to death as quickly as possible. Cassius never used his portrait on the coinage he issued preferring instead to display the image of Liberty either veiled or bare headed as a means of propaganda.

Another Gaius Cassius Longinus of mid-1st century AD was a descendant of the famed Cassius of the same name. This later Cassius was a lawyer or jurist and served as a governor during the reigns of Caligula and Nero. He served as governor of Syria in 45 AD, or perhaps earlier and authored 10 books on civil and other forms of law. In 58 AD, he criticized Nero for having too many honors and in 65 AD was charged with revering too greatly the memory of his ancestor Cassius. He was eventually banished by Nero to Sardinia. He returned to Rome once again under Vespasian and lived out his days in great popularity. He reportedly went blind at the end of his life.