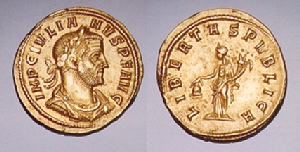 Marcus Aurelius Julianus was most likely the governor Moesia. Following the death of the emperor Carus and Numerian, that the empire fell into the hands of Carinus as sole ruler. The turmoil and economic conditions of the empire we still in a state of flux and no doubt this led to Julian successfully mounting a force in a rebellion against Carinus from Pannonia in 284 AD. Julianus gathered his forced an marched against Rome and its unpopular emperor. Julian was met by Carinus near Verona early in 285 AD. Being greatly outnumbered, Julian was defeated and slain.