Philip I faced 5 usurpers during his short reign. The last was Trajan Decius, commander of the northern legions. Trajan was hailed emperor by his troops and marched on Rome. Philip I set out to confront this new usurper but was defeated and killed during the battle. Philip II was then murdered by the Praetorian Guard in Rome once news had reached them about the victory of Decius. 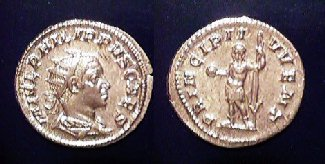