Son of Pompey the Great

Sextus Pompey was born in Rome, the younger son of Pompey the Great by his third wife, Mucia. Sextus was a gifted pirate leader from Orca between 43 and 36 BC. He gained position among the Pompeians only after the death of his father in 48 BC at the hands of the Egyptians. Joining his brother, Gnaeus, in the Balearic Islands after the defeat at Thapsus in 46 BC, Sextus subsequently served in Spain as a general in the legions against Caesar. In 45 BC, he fought against Caesar along with his brother in Spain at the Battle of Munda and lost. His brother Gnaeus once again escaped but was finally captured and beheaded. Most of the remaining Pompeians, including Labienus, were either killed or surrendered. Sextus, however, managed to successfully escape to the remaining Pompeian fleet, where he became the last remaining leader of their cause.

Sextus was one of the benefactors of Julius Caesar’s clemency policy. Following the assassination of Caesar on the Ides of March in 44 BC, Sextus received a Senatorial command of the fleet along the Italian coast being awarded the title “Praefectus Classis et Orae Maritima.” 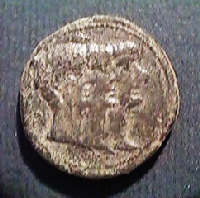 When the Second Triumvirate was formed by Marc Antony, Octavian and Lepidus, a list of prescribed names of men who were supporters of Brutus was produced. Sextus’ name was on that list. By August of 45 BC, Sextus’ naval command was outlawed. Sextus fled to Sicily, and with the large fleet of ships at his disposal, he began to raid the sea-lanes of Rome for profit returning to his old trade of piracy.

Sextus was indeed a skillful pirate. He turned the Mediterranean into a very dangerous place to do business. Sextus attacked any sea traffic that looked to be profitable and even began to raid the Italian coast. His band of supporters grew as he supplied a safe haven for all those condemned by the new Second Triumvirs.

Sextus finally managed to form an alliance with Marc Antony around 40 BC, but was quickly broken. Under the favorable terms received by Antony at the Conference of Brundisium in 40 BC, any support from Sextus was no longer necessary on Antony’s part. By 39 BC, Sextus was once again attacking shipping but this time his raids endangered the vital corn supply of Rome.

Octavian and Antony decided to meet with this pirate who became known as the “Master of the Mediterranean.” During the spring of 39 BC a conference was called at Misenum, yielding what became known as the Treaty of Misenum. According to the terms of this Treaty, Sextus agreed to respect Italy, to leave the corn shipments alone and to cease all hostilities. In return Sextus was given a position of respect and the promise of an augurship as well as a consulship.

In 38 BC, Octavian reopened the power struggle and needed to remove Sextus and his naval power. Octavian launched an attack against Sextus in Sicily which was followed by two years of defeat. Finally, Octavian sent his friend Marcus Agrippa against Sextus and the Mediterranean pirates in 36 BC. Agrippa faced Sextus in the Battle of Naulochus in where the forces of Sextus suffered a major defeat. Sextus once again fled the scene this time escaping to Asia Minor. Despite all the trouble he caused Rome, Sextus was still very popular among the people as is often the case with glorified criminals. It was this popularity in Rome that caused Antony to allow Sextus to finally live in peace. But Sextus tried once again to regain his lost political fortune, which led Antony to send his legate M. Titus who finally put Sextus to death.