Pubius Licinius Valerianus was a man from a respected Roman family, Valerian had held various offices in the government during the reign of Trajan Decius. At the time of the revolt of Aemilian against the emperorTrebonianus Gallus, Valerian was summoned to bring his army drawn from garrisons stationed on the Rhine.

Valerian almost immediately raise his own son Gallienus to the rank of joint Augustus. However, the turmoil of the period proved too overwhelming and his reign marks the biginning of a massive decline in the monetary system of the Roman Empire.

The reign of Valerian was marked by numerous frontier disturbances. In 256 AD, Valerian departed Rome for the East in order to deal with the rising threat from Persia. Valerian established his headquarters at Antioch in Syria and mounted his campaign against the Persian from this base of operations. In 257 AD, he appears to have won a great victory, at least according to his coinage. For it was at this time that Valerian took the title”Restorer of the World.” At the same time, Gallienus was waging his campaign on the northern frontier against the Germans.

Despite his initial success, in 260 AD, Valerian attempted a major assault taking his legions through Mesopotamia. In a tactical error, his legions were surrounded and the emperor Valerian was taken prisoner where he finally died.

Note: The obverse portrait styles for double aureii, antoniniani and dupondil are distinguished by a radiate crown. All other denominations display a laurate bust. 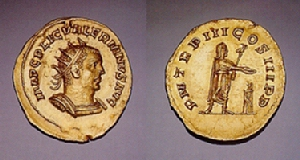 Note: The coinage of Valerian reflects the serious economic dfficulties during his reign. The high cost of defending the empire had taken its toll and there is no better record for that than the coinage of the empire itself. Both the gold and the silver coinage reflects the great difficulties during this period as hyper-inflation dominated the economy. The weight of the gold coinage varies so greatly, that at first glance it would appear as if there were no monetary standards whatsoever. The gold coinage is both irregular in size and weight. The range in weight for the gold coinage varies from as little as 2 grams to nearly 6 grams. It is clear that a double aureus was maintained, first being introduced by Caracalla briefly, and more formally by Trajan Decius (249-251 AD). However, specimens of the double aureus (as illustrated here) show a weight of 5.29 grams on average. This is slightly less in weight compared to the double aureus of Trebonianus Gallus at 5.67 grams. The aureus itself appears to have declined in weight fairly rapidly from 3.25 grams down to 2 grams. The wide variety in weights recorded by Roman Imperial Coinage reference, suggests that the decline in the monetary system was extremely rapid with perhaps the weight being reduced virtually monthly.

The silver antoninianus begins with a weight of about 3.5 grams. Within the first two years of his reign, the weight of this coinage declined below 3 grams. The silver coinage began to decline in weight steadily between 257-258 AD. By late 259 AD, the silver content itself began to declined dropping below 40% becoming a light chocolate bronze coin thinly coated with a silver wash. Ultimately, silver virtually disappeared completely between 262-268 AD under Gallienus and the antoninianus of this later stage had in fact been drastically reduced to the point that the coins were in fact mere bronze immitation thinly coated with a fine silver wash to keep up appearances (much like the withdraw of silver in modern times during the 1965-1968 period). Simultaneously, due to the fact that the once silver antoninianus had become debased to the point of a mere bronze coin itself, the traditional bronze denominations of the sestertius, dupondius and as ceased to be minted. The bronze was being used to coin the much more valuable antoninianus.