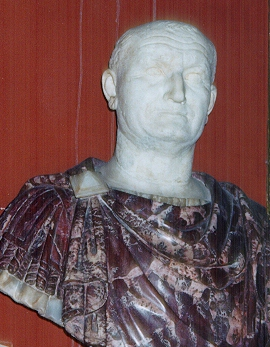 Titus Flavius Vespasianus came from humble origins, being born at Reate the son of a knight Flavius Sabinus, a tax collector, and his wife Vespasia Polla, who was also the daughter of a knight. Thus Vespasian was a member of the old family of the Flavii, or Flavians, from the Sabine country. His uncle was a member of the Senate, but Vespasian was slow to take advantage of whatever connections he did have through his family including applying for the advantages of membership in the Equestrians.

Vespasian had married Flavia Domitilla who was not a full Roman citizen. Although previously married, Domitilla and Vespasian were married in 39 AD. She bore two sons during her marraige to Vespasian, Titus and Domitian and a daughter, Flavia Domitilla the younger. Titus was born in 41 AD and Domitian in 51 AD. Domitilla died most likely during the reign of Nero prior to 69 AD. Vespasian did not remarry, but lived with his mistress Caenis, whom Domitian disliked intensely .

In 40 AD, Vespasian’s formal career began in with a praetorship. Vespasian’s military skill, however, advanced him in a series of important appointments. He was one of the commanders who invaded Britain under Claudius in 43 AD. Suetonius tells us that Vespasian won the ornamenta triumphalia during the campaign in Britain. He had fought in 30 battles, conquered two tribes and captured an island. For his loyality, Vespasian’s son Titus was raised at court along side Britannicus, where the two became devoted friends. However, Vespasian encountered the hatred of Agrippina the Younger due to his friendship with Claudius’ freedman Nardisus. Both Nardisus and Vespasian were opposed to Claudius’ marraige to Agrippina and his adoption of her sonNero.

Vespasian received a Consulship at Rome in 51 AD during the reign of Claudius. Nevertheless, Vespasian managed to survive the death of Claudius and remained in favor with the new Emperor Nero. Vespasian had received the Governorship of Africa in 63 AD. Unfortunately, Vespasian to the post in Africa proved to be less than profitable. His expenses were so severe that Vespasian went into virtual bankruptcy. Still, Vespasian refused to lower himself to the traditional larceny noted among most provincial administrators, Instead, Vespasian mortgaged his home to his brother and took up the profession of selling mules – a situation which earned him the nickname “the Mule Driver.”

Vespasian found himself back in Rome in 66 AD as a member of Nero’s court. He accompanied the Emperor on a trip to Greece where he committed the outrage of falling asleep during one of the Nero’s recitals in Achaea. Vespasian was dismissed by Nero and fled to a small town to await what he thought would be a death sentence for such an offense. Instead, in February 67 AD, Nero was in desperate need of Vespasian’s services. The Second Jewish Revolt had begun.

Sesterius issued to mark the conquest of Judaea

Vespasian was given command of the legions in Palestine and the rank of governor of Judaea along with orders to suppress the Jewish revolt. Vespasian proved his abilities once again. With his son Titus, Vespasian crushed the Jewish Rebellion and was preparing to lay Siege to the Temple of Jerusalem iteslf in 68 AD when word came that Nero was dead and that Galba was proclaimed Emperor. 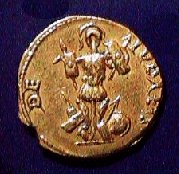 Upon hearing the news about Galba’s rise to power, Vespasian sent Titus to Rome with instructions to greet the new Emperor, a personal friend of Vespasian, and to express his loyality. Titus never made it to Rome with the message. By the time he had reached Corinth, news that Galba had already been slain (in January 69 AD) by Otho shocked Titus and his father. New Emperor Otho was a man of little substance and he too soon fell to yet another contender – Vitellius, commander of the German legions.

Titus immediately saw an opportunity and began to exploit it. Titus sought the support of the governor of Syria, Licinius Mucianus, and the Prefect of Egypt, Tiberius Alexander. With support assured, Titus convinced his father to allow himself to be proclaimed Emperor on July 1st, 69 AD. In the fall of 70 AD, Vespasian arrived in Rome where Mucianus had held the reins of power in his absence and the formal reign of Vespasian began.

Under Vespasian, peace and tranquillity had been restored to the Roman world and the end of the third civil war in less than 100 years had come to an end. To this end, the coinage of Vespasian proclaimed that peace had been restored and a new Temple of Peace was erected in a new addition to the forum known as the Forum of Vespasian.

Vespasian began a series of reforms, which began to reshape the foundation of the imperial system. In 73 AD, Vespasian assumed the powers of Censor and appointed new members to the Senate of Rome. His appointments included men of different origins from all the provinces and for the first time the Senate began to reflect the true international scope of the Empire. Vespasian also annexed territories in the East and reorganized the provinces.

Vespasian did not forget who had made him Emperor and a large donative was paid to the troops who had aided him. However, Vespasian rightly recognized that the path to the throne had been established by the legions and not the Praetorian Guard, as was the case during the Julio-Claudian era – particularly Claudius. To prevent any further uprisings, legions were stationed farther away from each other, and their numbers kept constant at 28. Vespasian also attempted to keep the legions busy to prevent idle minds from gaining ambitious ideas. Vespasian launched campaigns along the Rhine-Danube axis and in Britain, Wales was subjugated.

Vespasian was practical and good-natured. He tried to govern with a calm head and never rash or abusive as he had suffered under Nero. The Roman philosophers, especially Demetrius the Cynic and Helvidius Priscus the Stoic, pushed Vespasian as far as they could with insults before he was forced to take retributive action. Vespasian did not fall for the silly attempts at court to flatter him with ridiculus proposals. He laughed out loud when it was proposed that Hercules was the founder of his family. WhileSuetonius noted that his early poverty made him greedy, even Suetonius was forced to admit that Vespasian was generally very generous and honorable man.

Vespasian died at Reate on June 24th, 79 AD, after a bout with fever and dysentery. It was reported that his last words were: “Oh my! I think I am turning into a god!” Vespasian left his two sons, Titus and Domitian, as co-heirs to the throne.

Vespasian received the tribunician power on July 1st, 69 AD, and it was subsequently renewed each year on that date. His first consulship was held in 51 AD.

71 AD saw an explosion in output at the Rome mint. There were three successive phases in the output of sestertii; the early period with the obverse legend spelled VESPASIANVS, the middle period with VESPASIAN, and the late period with VESPAS. In his study of the Aes coinage of this year, Kraay located 311 different obverse dies used in 71 AD, 165 dies for this middle period. During this middle phase of coinage, the primary emphasis was on the Judaea Capta type, with 67 reverse dies (probably struck between May and July in connection with the Triumph of Vespasian and Titus celebrated at the end of June), though the Roma types were also struck in large numbers with 45 reverse dies.